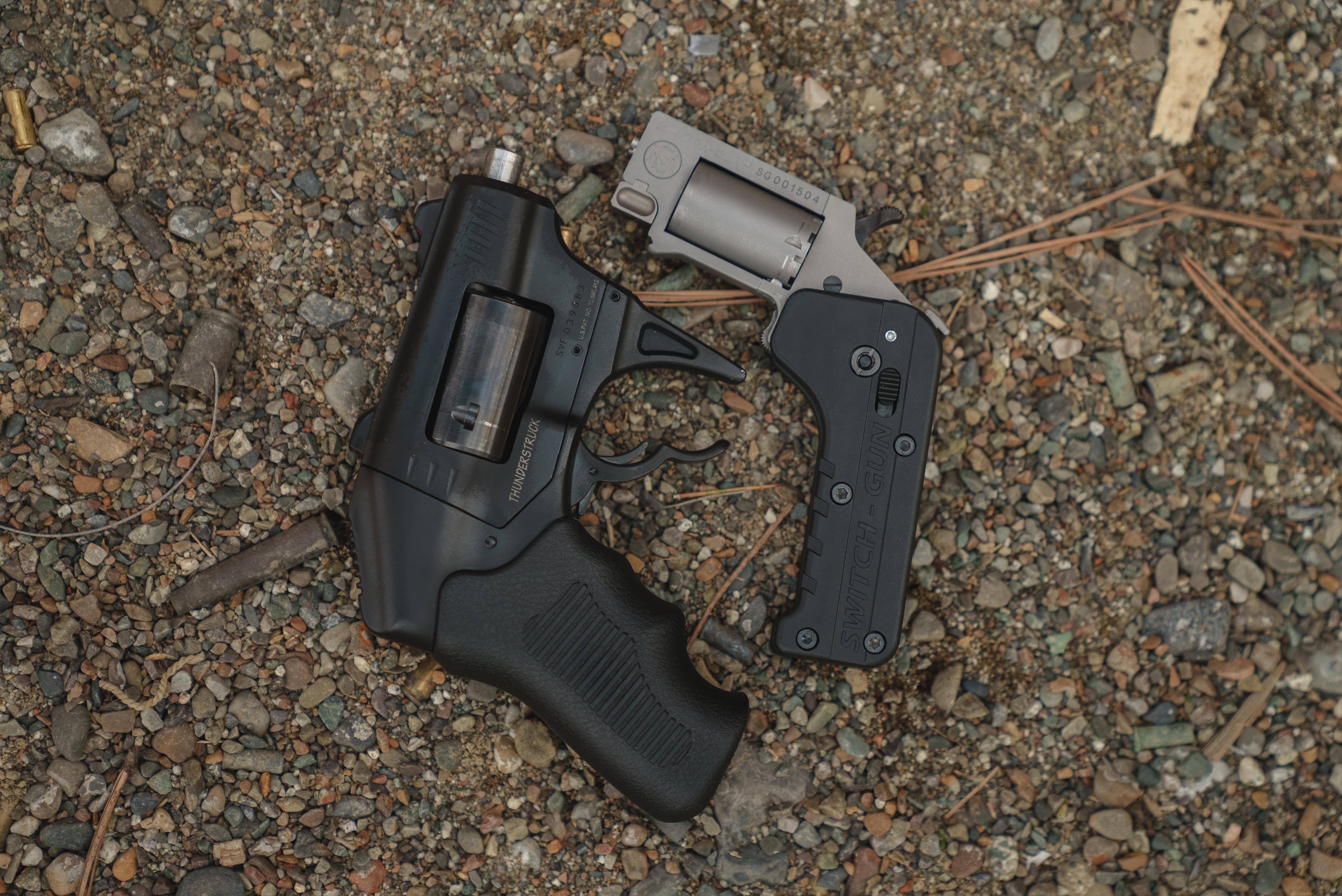 Standard Manufacturing produces some innovative firearms, two of which are the S333 (formerly called the S333 Thunderstruck) and their newly-released Switch Gun.

Both are a bit of a departure from other compact .22 pistols and have a niche and purpose that they could fulfill as a concealed carry gun. If you wanted to carry something a little different, these two guns would certainly be different and interesting.

But which would be better?

As with anything else, it depends on you and what your needs and priorities are. We think there’s a role for both, and we’ll tell you why during this comparison. So let’s dig in. 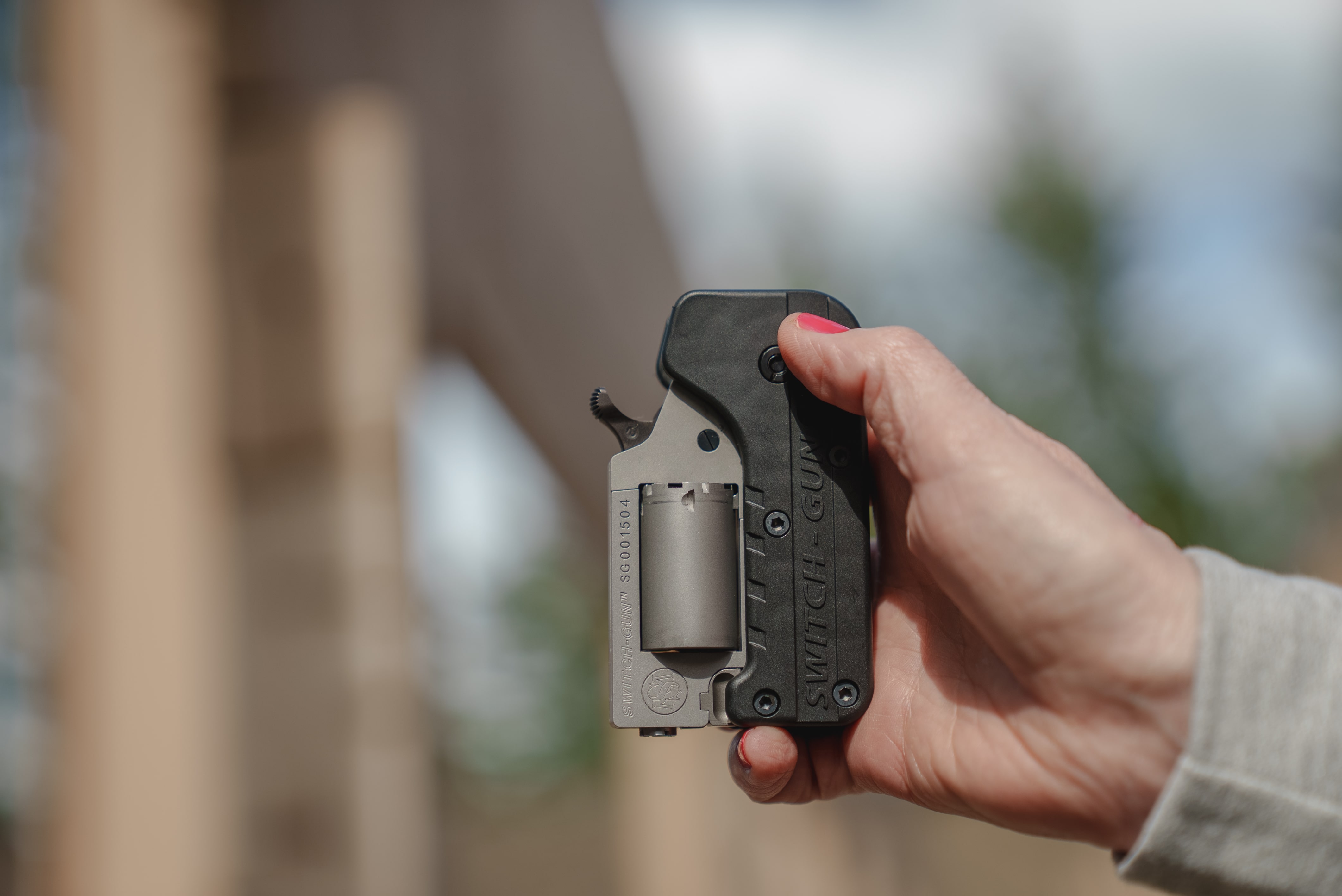 The Switch Gun .22 Magnum Revolver is a folding single-action micro revolver chambered in .22 Magnum, aka .22 Winchester Magnum Rimfire, .22 WMR, etc. The gun has a five-shot cylinder, and a single-action firing mechanism.

Here are the specifications:

The Switch doesn’t have the same length of grip frame like a full-size revolver because it doesn’t have to. The compact dimensions don’t require the same amount of real estate that a .38 Special would, which allows for the polymer grip housing to be attached.

The grip includes a latch mechanism that locks onto a tab in the frame, locking the pistol in the folded position. It cannot be fired when folded as the frame covers the trigger. To open the grip, you depress the button and it pops open. 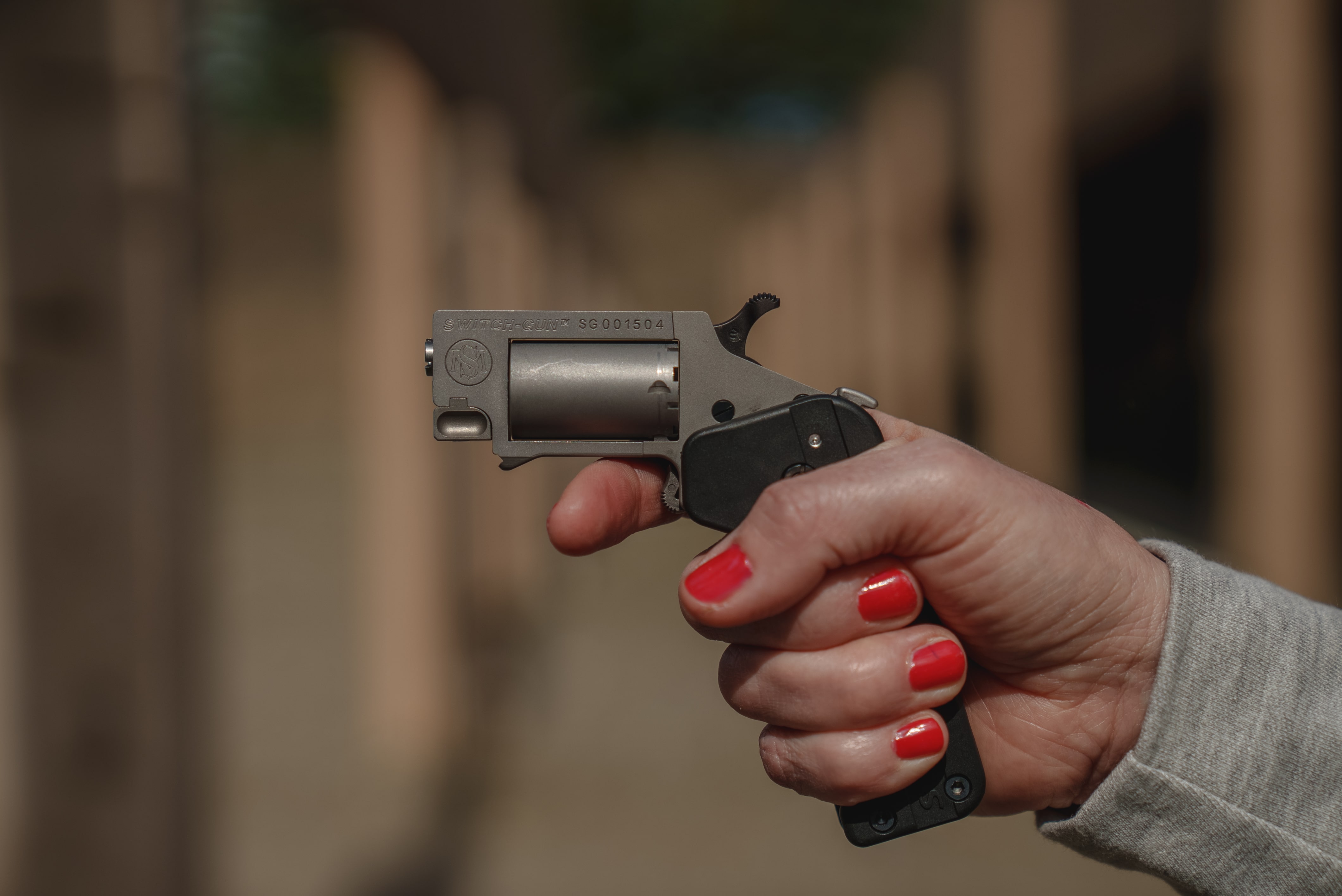 Once unfolded, you have to cock for each shot. It has trench sights in the top strap that become visible once the hammer is cocked, and the front sight has a fiber optic insert. The trigger is shrouded like a derringer or a Smith & Wesson Model 1 and similar guns. Upon cocking, it protudes forward and can be pulled.

How it would work is you load it, fold it and carry it. If you have to, draw the gun and hit the latch to unfold it. Then run it like a single-action revolver; cock for each shot.

However, Standard does have a second choice of .22 Mag carry gun. 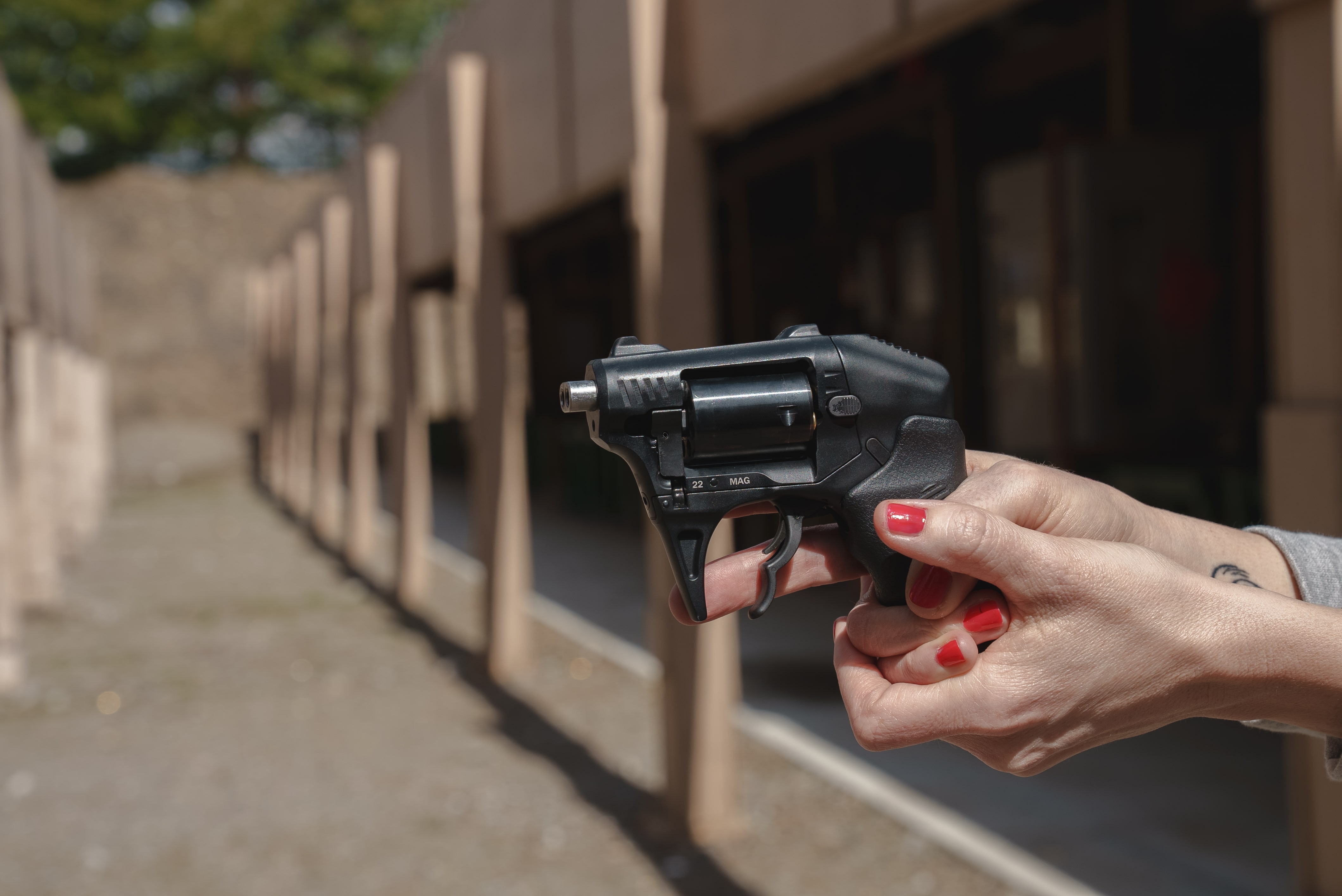 The Standard Manufacturing S333 Thunderstruck is now on its second generation, with some internal improvements over the original.

The S333 Thunderstruck is a an 8-shot DAO double-barrel revolver that fires two shots with each pull of the trigger. While capacity is 8, you get four pulls of the trigger. So while it’s kind of a snubby, it’s actually a volley gun much like the duckfoot pistols of the 18th century.

The original had some teething problems which required some revisions to the barrels. Standard Manufacturing has also determined the gun is a little ammunition sensitive. To get best results, they recommend sticking with CCI Maxi Mag, CCI Maxi Mag Hollow Point, or PMC Predator 40-grain loads.

Dimensionally, it’s the same size as any other snubby revolver, so there’s no need to go over the specifications (roughly 4 inches tall, 1.3 inches wide, about 5 inches long like a J-frame or an LCR) and weighs around 16 ounces loaded.

The aluminum frame and cylinder are set into a rubber grip. The sights are a fixed three-dot set (with red sights in lieu of white) instead of the more typical front blade and top strap sight set.

The firing mechanism is DAO, with two internal hammers that fire the two barrels simultaneously. It does have transfer bars for safe carry. It has a two-finger trigger, with a trigger safety blade and an open trigger gaurd. You fire by squeezing the trigger with the index and middle fingers.

Unlike the Switch Gun, the S333 has a contentional swing-out cylinder with an ejector rod, so loading, ejecting and reloading are faster and more familiar. You can order speedloaders from Standard Manufacturing if so desired.

So which is better? What’s the purpose of these guns? Let’s talk about that a little more. 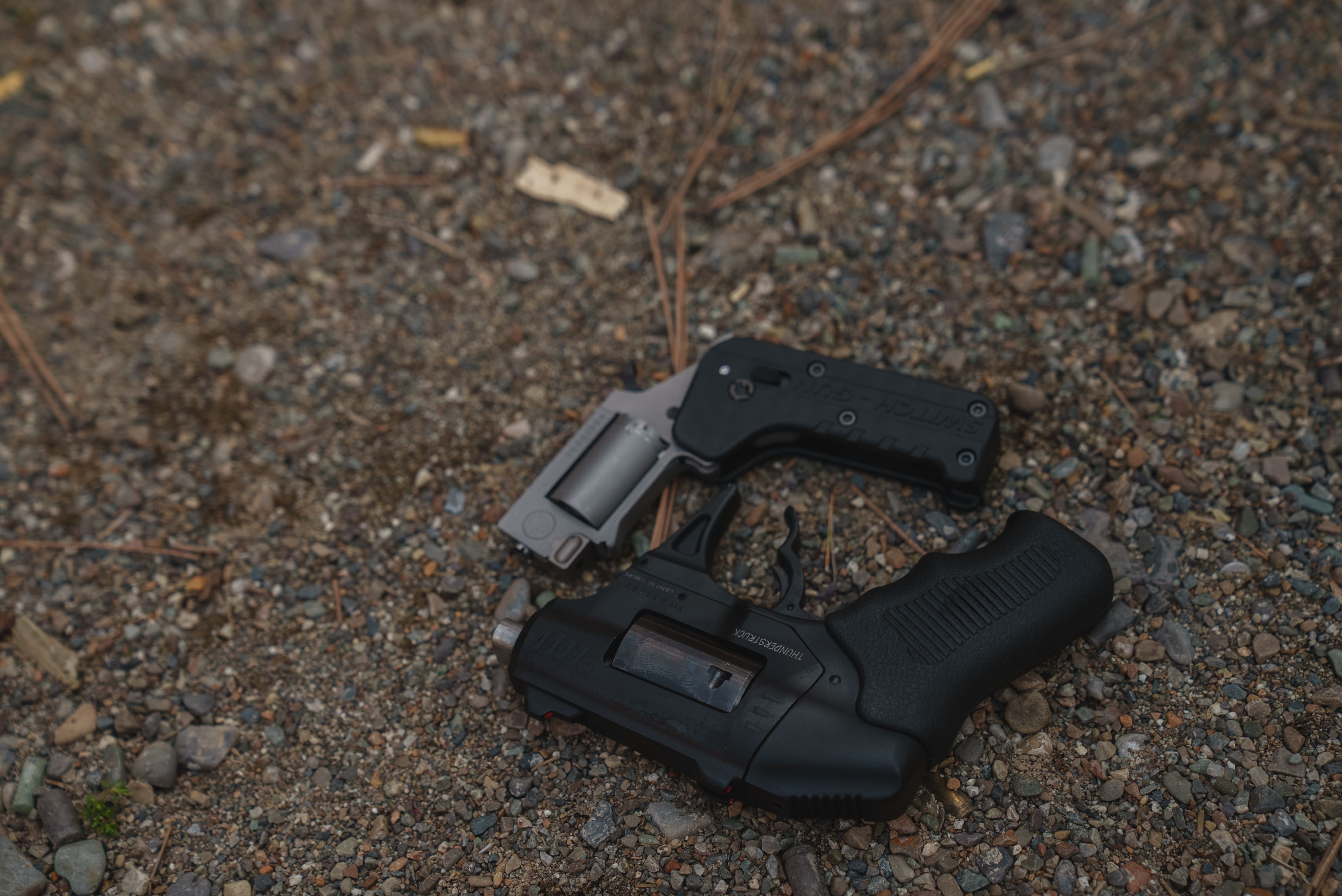 The best way to sum this up is that they’re both tools for doing the same task but in different ways.

Both fit the role of a pocket and/or deep concealment pistol. These are guns that are easy to carry and conceal, and would only be used to confront a threat that’s basically at contact distance or just outside of it. And that’s what these guns would be useful for; to break contact.

In that role, they both work and have a purpose. It’s just that both have a different way of doing it, a different philosophy of use.

The S333 Thunderstruck, because it is for all intents and purposes a snubby revolver, requires a holster. That could be an IWB holster, a pocket holster, or a holster in a backpack, purse or bookbag, but like any snubby revolver it does need one.

The Switch Gun, however, can be folded and kept anywhere. A jacket pocket, pants pocket, maybe even a shirt pocket. Easy to carry, easy to conceal, easy to access…just with a couple of extra steps (open gun, cock hammer) to get it into the fight. 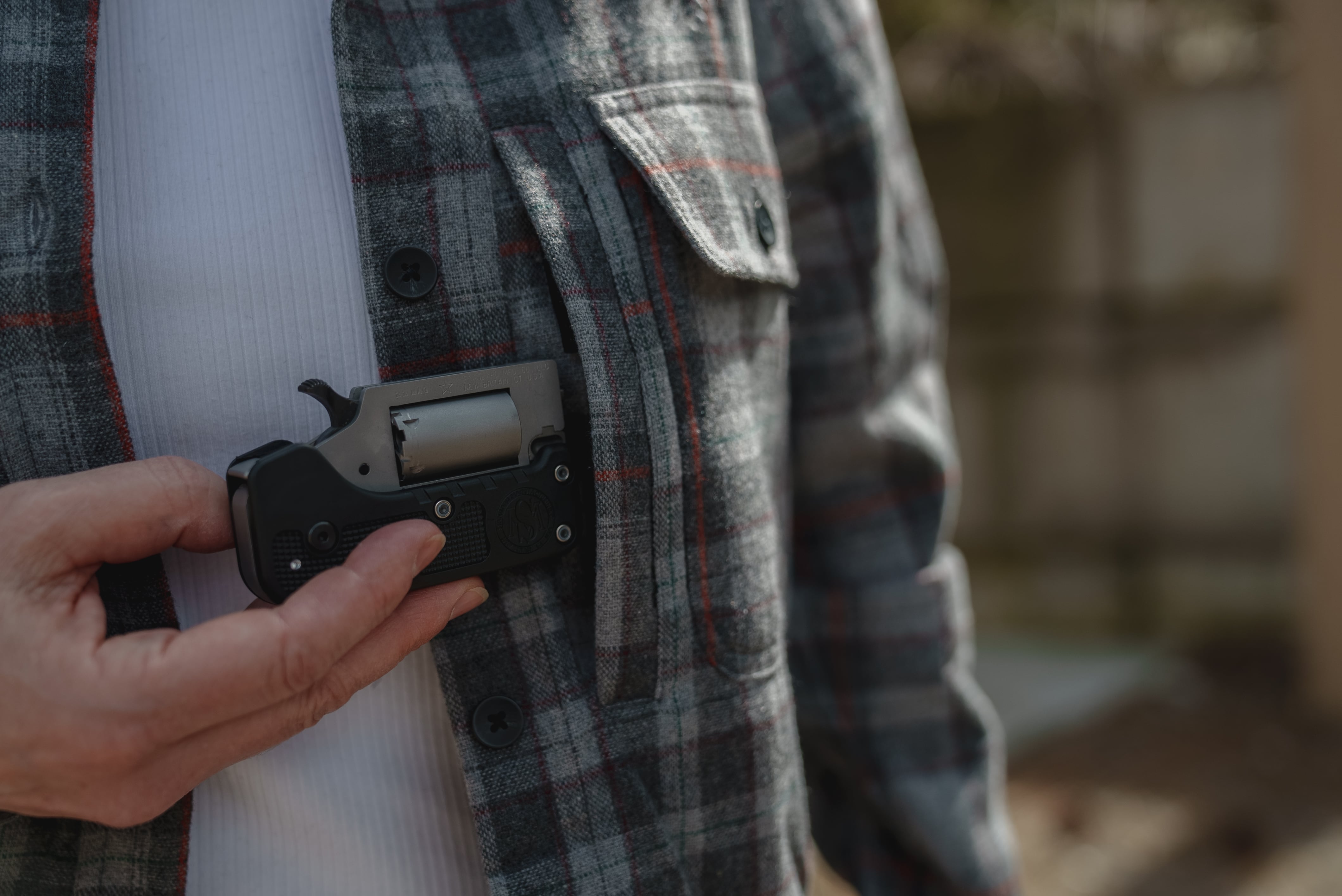 Which is better really depends on what you want out of the gun.

Enter The Mother’s Day Battle Of The Barrels Give Away To Win An S333! 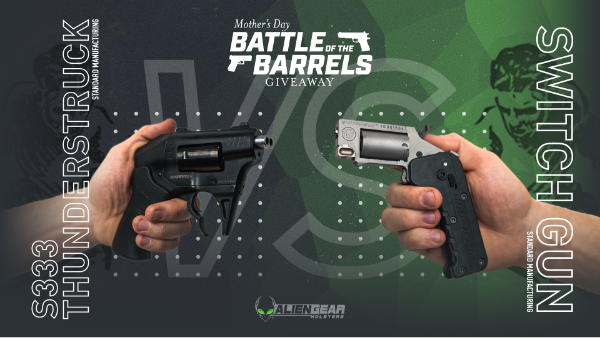 We’re giving away a Standard Manufacturing S333 Thunderstruck, along with other gear like eye pro from Edge Eyewear, cleaning supplies from Dirty Bore, Sonic Boom exploding targets, a $250 gift card from Unlimited Ammo, and of course some great gear from Alien Gear Holsters.

Enter for YOUR chance to win!