Let’s state the obvious right here at the start. The market is saturated with bipods of all different configurations and price ranges. A modern sporting rifle needs a bipod that is tough, compact, and versatile, but this can get spendy. I don’t care how good of a deal it is or how much someone says it’s just as good, you must avoid cheap bipods. In the long run, you’ll regret it.

Generally speaking, the Atlas, Magpul, and Harris Engineering bipods are good options and share some traits for which you need to look. But what features do you need? Lower bipods with a leg extension range somewhere between 4”-10” might seem too short, but it’ll work for 95% of situations.

Also, the bipod has to be able to cant from side to side to compensate for uneven terrain and keep the reticle vertical in relation to the target. The amount of tension needed to tilt the rifle can be adjusted, with my preference being just enough to keep the rifle at the angle that I set it at. This ensures that it will stay put and won’t flop the rifle on its side if I set it down. The Magpul and Atlas bipods also have a panning feature that is useful for moving targets or engaging multiple targets, such as during competitions.

For me, notched legs are another must-have feature if the bipod is needed for serious use. Leg notches allow for one-handed incremental adjustments from behind the rifle, and they won’t slip or loosen. In my opinion, bipods that use a tension knob aren’t desirable because they essentially require two hands to adjust. Also, they have a habit of slipping at the worst time.

The Atlas and Magpul bipods have removable feet that allow spiked feet or leg extensions to be inserted and used, adding to their versatility. Atlas-compatible accessories are a force multiplier since they allows the bipod to be reconfigured to meet the situation by just swapping out a couple of components. Adapters from Khantrol and Primary Adaptive Solution Systems can replace the stock Harris rubber feet and allow Atlas accessories to be used with the Harris bipod.

Mounting a bipod to the rifle can be accomplished a couple of ways depending on your intended usage. If you’re shooting in the prone or off of a bench, then a single bipod adapter like the Magpul version could be the better option. The Magpul adapter keeps the bipod close to the bore’s centerline, and mounting it close to the muzzle will help make the rifle more stable for better accuracy.

That being said, if you need the ability to quickly remove the bipod or relocate it, then a quick detach mount is the way to go. Sometimes, QD mounts are organic to the bipod and other times they are separate accessories. The M-LOK handguard on the SAINT makes it easy to put a rail section up front as well as run one farther back towards the magwell. Running the bipod that far back reduces the footprint of the rifle so you can get closer to what you’re shooting off of to stabilize it and/or the base itself.

Now, there is a right and a wrong way to attach a bipod. The Harris bipods, and similar, are designed to be mounted so that the legs fold forward. This doesn’t apply to Atlas bipods as the legs can be folded in either direction and still maintain total functionality. When the legs are folded down, put forward pressure on the bipod to help control recoil and keep the reticle on the target. This is called “loading”. There’s a misconception that loading the bipod requires putting all your weight on it; you simply need mild pressure on the bipod legs.

When used correctly, a bipod is an incredibly versatile tool that will help you make an accurate shot in situations you didn’t think were possible.

Editor’s Note: Be sure to check out The Armory Life Forum, where you can comment about our daily articles, as well as just talk guns and gear. Click the “Go To Forum Thread” link below to jump in!

Featured in this video 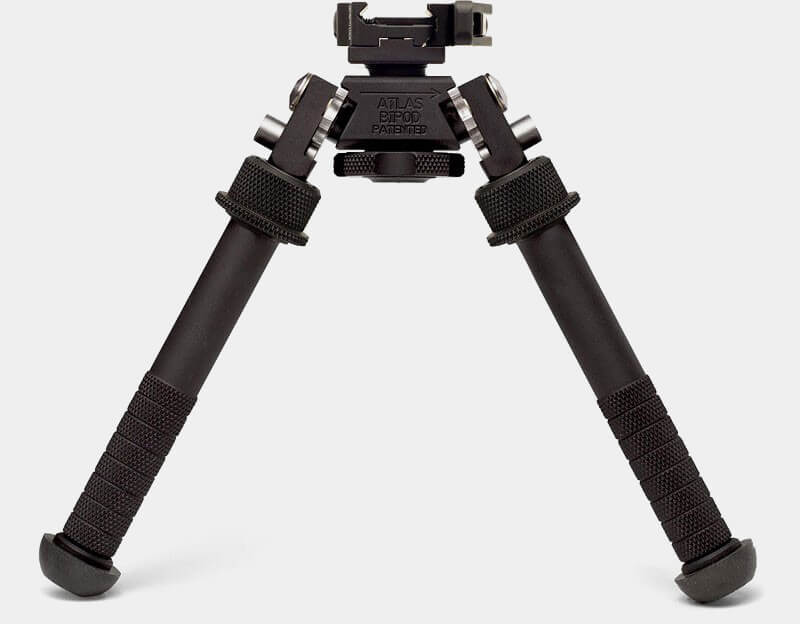