You start with the proven performers, best-sellers and the otherwise best on the market. Here are 6 of just that sort of .380 pistols.

The 42 is even smaller than the 43, but carries 6+1 with the standard flush-fit magazine. However, it’s small dimensions – 4″ tall x 6″ long x 1″ wide – and light weight at 13.76 ounces unloaded, make it incredibly easy to carry and easy to conceal all day, everyday. It also happens to be easier to shoot than many other mouseguns out there, and more accurate to boot.

Colt invented the micro 1911 when they created the Mustang, but Sig Sauer arguably perfected it with the Sig P238. Reviewers and owners alike have praised it for being easier on the shooter than many other .380 guns, which has long been the chief complaint about pocket-size guns.

The P238 is a tiny single-action semi-auto, meaning it has to be carried with the hammer down over a live round or cocked and locked. Carrying capacity is 6+1 with the flush-fit magazine or 7+1 in an extended version. Sig Sauer likes to give people a bunch of choice of trim level, so you can get the basic blackout version all the way up to their Rose Gold version.

A relative newcomer is the M&P 380 Shield EZ. However, some would argue that the 380 EZ is one of the few pistols that treats the .380 correctly. It’s a great choice of .380 pistol due to the ease of operation.

You see, tiny guns get made in .380 ACP because it’s the biggest small round out there; standard 9mm has too long and wide a case to make really small guns. The problem is the barrel length means you don’t get the best of accuracy. Additionally, the small dimensions and scant weight make the gun less pleasant to shoot.

The 380 EZ solves this problem, by putting the .380 round in the same size of pistol as the standard M&P Shield, one of the best and most popular carry guns on the market. Barrel length is 3.675 inches, so you get accuracy and better performance from ammunition. Carrying capacity is 8+1, so you can carry a little more in that regard. The slide is easier to rack, and the pistol will be vastly softer-shooting than other .380 pistols.

Let’s face it: the Bersa Thunder .380 is a Walther PP/K clone. It isn’t an exact copy, but it’s so close that we might as well not split hairs. It also happens to be competitively priced. It also happens to be reliable and accurate for a small gun, which is why it remains one of the most popular .380 pistols on the market.

The Thunder .380 is the old schooler on this list. It has a metal frame and slide. It uses a double-action firing system, with the Walther controls (slide-mounted decocking safety) that lets you carry on safe or lets you decock the hammer for a double-action first shot. You get 8+1 with an extended magazine, 7+1 with a flush fit.

Be aware, however, that you have to learn to run the double-action trigger system as well as the slide-mounted safety/decocker. Like Berettas and old Smith and Wesson semi-autos, you carry it in double-action mode with the safety on or off; you can’t carry it cocked-and-locked. So you will need to put in the reps to get competent with this .380 handgun.

Dimensionally, it fits between micro guns like the Glock 42 and Sig P238 and the 380 Shield EZ. Barrel length is 3.5 inches, and overall dimensions are 6.6″ long by 4.9″ tall by 1.3″ wide. Weight varies by model, but it has a bit of heft given the metal frame, so about 20 ounces. However, the heft tames recoil, which helps with a small gun.

The classics are classics for a reason. Check out the Bersa Thunder .380 and you’ll see why. 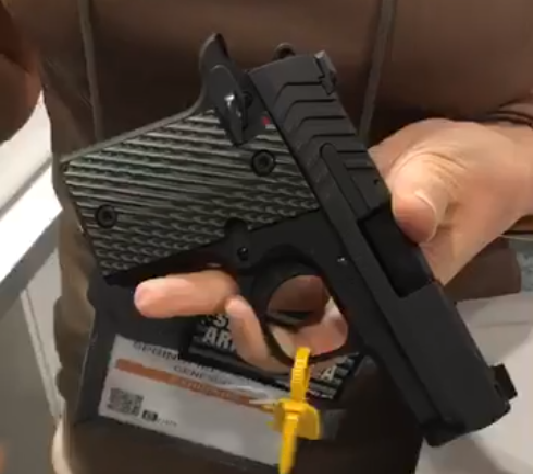 The Springfield 911 is much like the Sig P238, in that it’s a (Colt Mustang clone) micro 1911 in .380, though sans the grip safety. However, the 911 has certain advantages that the P238 lacks, and certainly also over the Kimber Micro.

To be Frank (start spreading the…nevermind) the big difference is that the Springfield 911 is just as good as those guns but costs less. The Sig P238 starts at $679 MSRP for the basic black Nitron model (darn steep for a mouse gun) but the 911 can be had starting at $429 MSRP for the 911 Alpha model, which isn’t unreasonable.

Build quality is excellent, capacity is 6+1 with the standard magazine, but you can buy 7+1 extended magazines. The 911 is one of the easiest-shooting micro pistols out there, so if you can hang with the single-action firing system…you don’t want to overlook this one.

Ruger, formerly known for good working rifles and revolvers so tough that “Ruger handloads” became a real term, branched out into concealed carry guns with a line of .380 pistols that started with the LCP. The improved version (vastly improved, according to many) is the Ruger LCP II.

The LCP II is a slim micro pistol with an integrated trigger safety (a la Glock) and a smooth, easy trigger pull. It holds 6+1 of .380, and is eminently carryable with dimensions of 3.71″ tall by 0.75″ wide by 5.17″ long. It weighs just 10.6 ounces, so it’s easy to tote. It is also the definition of user-friendly. Controls consist of a magazine release, slide release…and that’s it. The sights are iron and machined onto the slide so you can’t even change ’em.

Simple, small and a price that’s nice ($350 MSRP; most gun stores charge closer to $300 or less) makes this an ideal deep concealment pistol or backup gun for ankle carry if one were so inclined.

The .380 ACP round is obviously on the smaller side, and with short barrels in most firearms for this round that means that care must be taken to select the best .380 ammo for a self-defense pistol. This applies to ANY caliber, of course, but is even more vital when carrying a smaller round in a shorter barrel.

Barrel length does impact terminal performance, so it becomes critical to select a load that is formulated for use in short-barrel pistols and has a track record of working.

When choosing .380 ammunition, select the heaviest loading possible. The truth about ammunition performance is that a well-made bullet of any grain weight can be a reliable performer, but a corollary is that heavier grain weights tend to work better in a defensive capacity. Not always, of course, but they tend to, and much more so with smaller calibers. Therefore, you’ll want to select a loading of 90 grains or more.

Here are some popular examples. Each is a popular load, available in most gun stores, with a proven hollow point bullet design from a known manufacturer of good carry ammo.

Speer Gold Dot 90 Grain JHP: Speer has long been one of the standard protection and law enforcement brands, and are in fact the supplier of the FBI’s current duto ammo. Short-barrel loads in .380 and .38 Special are one of their specialities.

Winchester PDX-1 Defender 95 Grain JHP: Winchester’s PDX-1 ammunition is basically their Ranger T series with a new paint job so they can sell it to civilians. The Ranger T series, of course, is the infamous Black Talon without the black coating. A proven bullet design from a proven bullet (and gun) maker.

Winchester Silver Tip 85 Grain JHP: another entry from the classics, the Winchester Silver Tip is a long-serving hollow point design. While it’s aged from a certain perspective, it’s also a classic for a reason and that reason is that it does it’s job. It’s also a little less expensive than some of the other popular carry rounds, so you can get carry rounds without breaking the bank.

You’ll want to make sure that you experiment with your carry load, namely shooting a few different brands. Whichever seems to cycle best and group the tightest is the one to carry. You need to put shots where they count if called upon to do so, so make sure that the bullets you carry allow you to do so.

What’s the best .380 pistol for concealed carry? That’s highly, highly subjective. Ultimately, there is no “best” one objectively, but there IS a best 380 pistol for YOU.

What you’re looking for is a mix of factors, some of which we can speak about intelligently and some we can tell you about…but you need to find out for yourself.

First is fitment. How a gun fits impacts how comfortable it will be in the hand and how well you shoot it. Smaller-form pistols can make this complicated for some people; some folks find subcompact and micro pistols are rarely suited to them and some folks find they can make it work. That much depends on you.

First is how the .380 pistol sits against the meat of the thumb and the lower part of the rear of the palm. (The thenar and hypothenar muscles, unless I read an anatomy site wrong!) The rear of the grip should fit against them well, with minimal gap between those areas of the hand and the grip.

The top of the hand should be high on the gun, as close to the bore as possible, but with sufficient clearance for the slide to operate. A common thing to look for is slide bite; many a person has suffered a cut from the slide of a .380 handgun. A gun that hurts you is one you won’t carry.

Lastly is trigger reach, the distance between the rear of the grip housing to the face of the trigger. A good fit is neither too long nor too short. You should be able to grip the gun and – without conscious effort – place your index finger on the trigger. Too far forward, and you won’t get good contact. You can live with one that’s a bit short for yo;u, but if the trigger is too far back you’ll struggle to reach and operate the go-pedal.

Therefore, select the pistol that fits you best. If a .380 is all you can shoot, or if you refuse to carry a pistol that’s any larger, make sure that you’re staking your life on a tool that you can use.

The next part is something you have to find out for yourself. Namely, how well YOU can operate a .380 pistol or indeed any pistol.

You have to get to the range and try it out. If you can’t run the gun well, you won’t use it well in the moment of truth. The reason you carry a concealed carry handgun is to potentially save your life if you need to; you need to put yourself in the best possible position for success if that happens, and selecting a pistol that you can operate comfortably and competently is part of it.

Granted, handgun shooting fundamentals are more important; don’t fool yourself into thinking the hardware matters more than the operator. If you can’t hit the broadside of a barn, it doesn’t matter if you carry a Sig P238 or a Colt Gold Cup. A competent shooter will be able to use either to save his or her life.

Therefore, make sure that you can run the .380 gun you get. Find one that fits you, with a trigger you can use and sights you can see. And hit the range!

Have you shot these firearms? What did you like, and what didn’t you?
Let us know in the comments below!

Born in southeastern Washington State, Sam Hoober graduated in 2011 from Eastern Washington University. He resides in the great Inland Northwest, with his wife and child. His varied interests and hobbies include camping, fishing, hunting, and spending time at the gun range as often as possible.